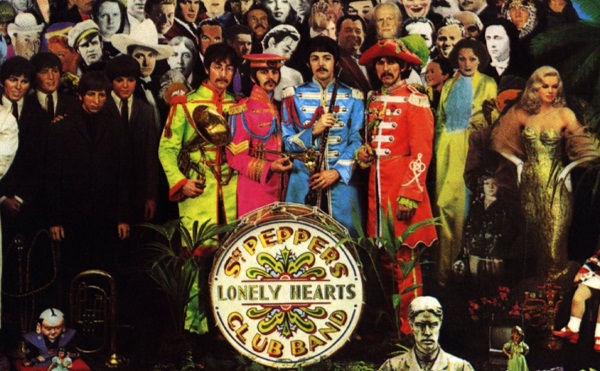 As mentioned in my OK Computer post, I’m someone who is still relatively new to being obsessed with music. It wasn’t really part of my family growing up and it’s not something that was ingrained in me from a young age. I see this as both a blessing and a curse: On one hand, I feel like having a “blank slate” helped me form unique tastes that aren’t influenced by too many outside sources. I was able to identify what I liked and why I liked it all by myself.

The downside is that I feel like I’m constantly in a state of catch-up, particularly when it comes to past music that, for most music lovers, is just common knowledge. In particular, I have a rather shameful and embarrassing ignorance of most 60’s music.

Admittedly, part of that is my own doing. I’ve listened to plenty of older music from the 70’s, 80’s, and 90’s, but I’ve sort of consciously avoided the 60’s for a few reasons. One of them is that I’m more of a punk fan at heart — my tastes veer more towards the aggressive and I’m drawn to the punk ethos and the fact that the music is naturally making a statement. The 60’s had the seeds of punk in some places, but at least the kind I enjoy didn’t really pick up until the 70’s.

A bigger problem that I have with 60’s music doesn’t so much have to do with the music itself, but more with the way certain things get canonized and romanticized until there’s no room for any sort of reasonable discussion anymore. At a certain point it seems like a lot of the music from the 60’s has just become immune to any criticism and is only mentioned in slobbering articles, with massive statements about how “revolutionary” and “groundbreaking” it is. I feel like there’s a common perception among some music fans and reviewers that music is automatically better because it came from the 60’s.

Personally, I don’t think anything should be above criticism, especially something as subjective as music. So I thought this series, which is inspired a lot by NPR’s “You’ve Never Heard…” and the AV Club’s Better Late Than Never features, would be a good way to not only fill my embarrassing gaps in 60’s music knowledge but also to honestly evaluate and critique this music without being bound by nostalgia.

There was only one place to start with this experiment: The Beatles. Now obviously I’ve heard a lot of Beatles songs, because I’m a human being living on planet earth, but I had never really gotten the urge to just sit down and listen to their albums. Partly because, for me, a lot of the joy in music is the discovery: I love finding great music that has been overlooked or only has a small following. It makes me feel like I know something other people don’t, and it’s easier for music to emotionally connect with me that way.  (I realize this makes me sound like one of those hipster douchebags who hates anything that’s popular, but I can’t help it.)

Obviously, no such feeling exists with the Beatles. They’re everywhere. If you want to “discover” the Beatles, you just have to go to a local shopping mall or turn on the TV. The fact that the band is so widely and unanimously adored is a lot of the reason why I’ve never gone too far out of my way to listen to them. On some level, the band’s music doesn’t feel like it belongs to me. It belongs to the massive, crazy Beatles fans who were there during the 60’s or the people that know the words to every Beatles song and completely worship them.

I should clarify that I like the Beatles, at least most of the songs I’d heard going into this. I just have a negative reaction to the way they’re so endlessly mythologized, this attitude that the Beatles invented everything and it’s all been downhill since the Beatles and if you don’t listen to the Beatles you must be an idiot who knows nothing about music. I’m sick of stuff like Across the Universe and the like that is all about putting the Beatles onto this golden pedestal to the point that, if you say anything even remotely negative about them, you risk being shunned by society.

I could have picked pretty much any Beatles album (I might still do more in the future), but I chose Sgt. Pepper’s Lonely Hearts Club Band to start this. It was named the best album of all time by Rolling Stone a few years ago and has an overwhelming consensus as one of the all-time great albums. It’s generally recognized as being part of the band’s creative peak.

One of the main things I knew about the album before hitting play is that it’s been recognized as one of the first concept albums, as The Beatles, tired of touring, created a fictional band which presents the opening title track. That segues into the Ringo-sung “With a Little Help From My Friends,” which is a pretty classic Beatles tune with a great melody. After that, the concept is mostly dropped, which apparently bothers me more than anyone else, so I won’t make a big deal of it.

From there it moves to “Lucy in the Sky With Diamonds”, John Lennon’s ode to a girl named Lucy that was in the sky with diamonds and totally not LSD. That song’s combination of pop and psychedelia pretty much sums up the first chunk of Sgt. Pepper’s, which is a bunch of irresistible, catchy pop songs that also have a lot more to them than it might appear on the surface.

It’s in the middle part where Sgt. Pepper’s kind of lost me. “Being for the Benefit of Mr. Kite!” has the pop craft that the Beatles are known for, but the lyrics are pretty silly which made it disposable for me. After that was George Harrison’s “Within You Without You.” It’s a good song and I generally like Harrison’s sitar experiments with the Beatles, but it also feels disconnected from the rest of the album, like a George Harrison solo effort that just got plunked in there (which it basically is — none of the other Beatles played on the track).

After that is “When I’m Sixty-Four.” I said I’d be honest so here goes: I think this is a terrible song that comes pretty close to derailing the whole album. It’s just so maudlin and goofy sounding, it has no connection to the rest of the album’s sound, and in general it just sounds like McCartney making a song for a crappy children’s cartoon. I wish it didn’t exist. While a lot of the sounds the Beatles used on this album have been influential, I’m thankful that this one hasn’t.

Fortunately, things pick up from there with “Lovely Rita,” which is more in line with the first part of the album as a great pop song with some excellent harmonies and an infectious piano part. “Good Morning Good Morning” combines psychedelic guitar and horns into another tight pop package. It’s the kind of combination of accessibility and experimentation that has defined the Beatles.

After that there’s a reprise of the title track, just to remind people that what you just listened to was a concept album (even though it totally wasn’t — okay, I’ll drop it). That’s followed by “A Day in the Life,” which is one of my favorite Beatles songs and definitely one of their classics that I won’t argue with anyone about. Both the McCartney and Lennon parts are excellent, and they’re glued together in a way that makes perfect sense and helped redefine what a song could be in this era of music.

Overall, I obviously didn’t come out of my first serious listen to this album instantly going “THIS IS THE BEST ALBUM EVER EVERYONE WAS RIGHT,” because music doesn’t work like that. However, I can clearly see why it’s considered so amazing: On the surface it’s a great, listenable pop album, but beneath that you realize that the Beatles were experimenting and doing things that no other band had done before in the studio. That sense of experimentation, for me, led to a couple of dud tracks, but those duds were the result of the same artistic risk-taking that created “A Day in the Life” and the other parts that made it work.

Still, when listening, I can’t help but feel like I’m in a stuffy museum, observing it from afar rather than really experiencing it. I enjoyed most of the tracks but rarely felt that vital emotional connection, that spark I get when I find something I really love for the first time. I have a feeling that this isn’t the fault of the Beatles, it’s just what happens when art becomes so inescapable and influential. So many of the Beatles innovations have become commonplace that it’s likely that I simply can’t appreciate them the way people did at the time when there was no real precedent.

A lot of what music you really love comes down to timing: At a certain age a band might really make an impact that wouldn’t be felt if you listened to them even a couple years later. In that regard, I think I’ve either missed the boat on loving the Beatles or it simply hasn’t arrived yet. But listening did help me gain a respect for the band’s ability to play to the top of the pop charts while simultaneously experimenting with what music could be.