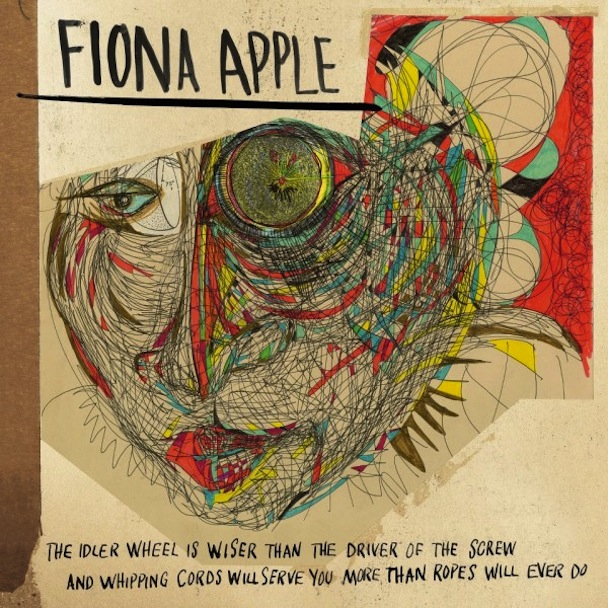 Stream it on NPR

If there were any lingering doubts I had about the first Fiona Apple album in seven years, they were quickly erased when she revealed the title: The Idler Wheel Is Wiser Than The Driver of The Screw And Whipping Cords Will Serve You More Than Ropes Will Ever Do. The decision to go for another poem title after 1999’s 90-word When the Pawn… was a classic Fiona Apple move, one that made her detractors smirk and made her supporters shake their heads and chuckle to themselves. Seeing it was a sign of reassurance, a confirmation that the Fiona Apple who always follows her artistic muse — occasionally to her detriment — was still around.

Being a Fiona Apple fan is often frustrating. While some artists always seem to be in the spotlight and working on new projects, Apple — a noted recluse who claims to rarely leave her house — falls completely off the radar between albums. This can sometimes give the illusion that she isn’t working or doesn’t care about making music anymore, and at times in the last few years I wondered if I would ever hear new music from her again. The advantage is that when she does finally resurface it feels like an event, and with The Idler Wheel… she’s offered a reminder of how much music has sorely lacked her presence since 2005.

Apple officially returned to the spotlight at the South By Southwest music festival, where her performances of new songs were met with rave reviews for their raw energy and nerves. She frequently sang with her eyes closed, twitching back and forth and, as usual, sang with a tremendous amount of conviction, as if she was excising some inner demon with each performance. Little details like this are what makes Apple so refreshingly different from what music has become now. There are no put-ons or affectations, no musical gimmickry or autotune. She does not hide behind a persona. All she’s done (at least since Tidal) is be herself, and that’s especially true on The Idler Wheel…, which is probably her most Fiona Apple-y album yet.

The Idler Wheel… mostly ditches the sometimes excessive instrumentation that permeated Extraordinary Machine, putting the focus entirely where it should be: on Apple’s voice and lyrics. The music is primarily based around piano and percussion, with a lot of different drums and several sampled sounds used to give the songs Apple’s trademark quirkiness while not stealing the spotlight from her. As usual, Apple’s lyrics are witty and reflective, focusing on her relationships and inner struggles. Her voice used to sound silky smooth on earlier albums but now has a world-weary rasp that serves the songs and subject matter better.

Like all of her albums since Tidal, The Idler Wheel… isn’t making a huge bid for radio play and commercial success, as the spare instrumentation makes the songs more suited for quiet headphone listening than blasting on the radio. Lead single “Every Single Night” is probably the most accurate glimpse into Apple’s psyche so far (and the artistic psyche in general), where “every night is a fight with my brain.” The accompanying music video with Apple wearing an octopus on her head and being covered in snails reminds me a bit of the video for “Criminal,” but with slimy animals instead of creepy sexuality.

Other songs, like “Werewolf” have a sense of looking back, perhaps to early childhood. The most chill-inducing moment on the album is in the last minute of that song, when Apple samples in the sound of children playing on a playground, instantly giving the song a tangible sense of longing for simpler times as she sings the quotable line “nothing wrong when a song ends in a minor key.” Elsewhere, Apple pays tribute to former boyfriend Jonathan Ames (on “Jonathan”) rather than excoriating him like she may have done when she was younger. Album closer “Hot Knife” is probably the catchiest song on the album, a timpani-backed duet with her sister where lovers are imagined as hot knives that cut through butter.

It’s hard to imagine any member of Apple’s rabid fan base being disappointed with The Idler Wheel…, which is an extremely individual record that shows her talents in top form. Her voice sounds better than it ever has, and the arrangements complement it perfectly. Her lyrics, which I’ve always contended are some of the few in music that stand up as poetry without accompaniment, are as quotable as ever, and Apple continues to have the special ability to make her personal experiences seem universal. This album serves as a reminder that she is one of the most talented singer-songwriters there is, and that her work is always worth the wait.