If you’ve been reading this blog from the beginning (which I can only hope you have been, for continuity reasons), you may have noticed that there’s been a distinct lack of actual new music on it.  This is sort of intentional:  While I’ve actually liked 2011 quite a bit and have been making a conscious effort to listen to a lot of new stuff, I still think that something has been missing from current music.  I’ve grown a bit jaded about how most of the hyped bands of the day all seem to chart the same influences, to be following the same basic formula, and constantly living in the past.

Enter Wild Flag, a four woman supergroup consisting of singer/guitarist Carrie Brownstein and drummer Janet Weiss from Sleater-Kinney, Mary Timony from Helium and a solo career, and Rebecca Cole of the Minders.  Those names probably don’t mean a whole lot to many people reading this, but for me and many others its a dream collaboration, a veritable Traveling Wilburys of indie rock goddesses.  From day one, the band has had a massive amount of hype and expectations from rabid Sleater-Kinney fans, the kind like me who think rock music has been circling the drain since the band went on indefinite hiatus in 2006 following their colossal swan song, “The Woods.”

The expectations for Wild Flag are expected, but also unfair.  In reality, there’s no way the band could capture the unique chemistry and passion that defined Sleater-Kinney.  However, their debut album, which is streaming on NPR, is nonetheless an immensely satisfying collection of tunes that fills many of the gaps left empty by today’s indie kids.

See, Wild Flag make rock music.  Not “indie” rock or “noise” rock or whatever other lame qualifiers people seem to put in front of it now.  This is fun, energetic rock music that is never boring, and in today’s musical climate that qualifies as a revelation.  It doesn’t have the urgency of Sleater-Kinney or the dark combativeness of Helium; rather, it’s a pure, unpretentious showcase of everything that rock can offer from four women who know a lot about it.

A common knock on supergroups is that they’re more a collection of individuals than a cohesive band.  Wild Flag defies that, as they’re instantly able to craft a unique sound that separates themselves from their previous bands.  It’s a diverse collection of songs, from the almost power pop lead track and first single “Romance” to the woozy psychedelia of “Glass Tambourine”.  Brownstein and Timony mostly trade vocals and harmonies, and each brings a different energy to each song.

While the hype around Wild Flag has mostly surrounded the Sleater-Kinney semi-reunion, it’s actually Timony who may be the band’s MVP.  In the later days of Helium and the beginnings of her solo career, Timony flirted with being sort of an indie fantasy pixie girl, as she sang about magic and dragons and played quirky songs full of lush instrumentation.  She doesn’t do that on Wild Flag (although she does sneak a “dragonslayer” reference into “Electric Band”), but her more laid back, mystical qualities make a nice foil for Brownstein’s hyperactive wildness.  It’s illustrated on album closer “Black Tiles”, my favorite song so far, and the only one where they exchange lead vocals and put that duality on full display.  Both are also tremendously gifted guitar players and are able to rip a lot of memorable riffs and solos in each song.

Of course, Wild Flag is also anchored by Weiss, who continues to prove that she’s arguably the best rock drummer in music today.  I know absolutely nothing about drumming, but I can still tell that Weiss is really, really good at it, and she brings a ton of life to each song with her thunderous playing.  Rebecca Cole (who I’m mostly unfamiliar with) also gives the songs some extra bounce with her keyboards, which add an extra dimension that the group’s previous bands didn’t have.

In the end, Wild Flag meets their lofty expectations and provides an absolute treat for Sleater-Kinney fans like me that were too busy failing at life to get into them before they went on hiatus.  But beyond that, it’s possibly the most refreshing album of the year so far — a much needed shot of energy and life into the increasingly dull music landscape. 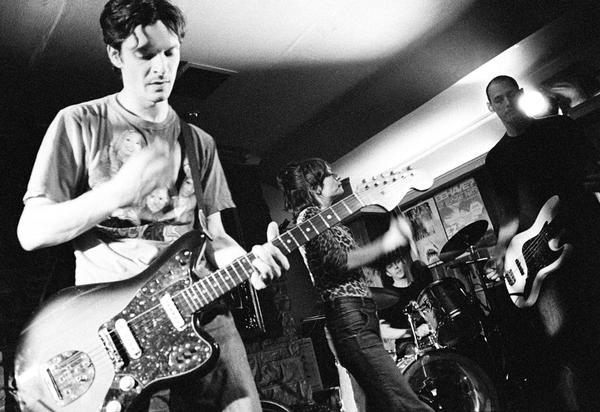 Listening to Life Without Buildings for the first time was a thoroughly confusing experience.  On first listen, the band’s songs were hard to differentiate from one another and seemed like they were all over the place.  I also thought the singer might be mentally challenged and had no clue what she was babbling about.  Despite that, I was intrigued, so I made a mental note to revisit the band later.

So Life Without Buildings sat on my iPod, metaphorically gathering dust.  Occasionally I would scroll past them and try to remember who they were, then tell myself “oh yeah, the band with the weirdo singer” before I moved on to whatever I was going to listen to.  Then one day, I made a Facebook post about how I couldn’t get into Joanna Newsom despite my love of weirdo indie females, which reminded me of another weirdo indie female that I had forgotten about.

That weirdo singer was Sue Tompkins, a painter and sound artist from Glasgow who fronted Life Without Buildings.  Tompkins’ distinctive talk-sung vocals were the calling card of the band.  She took the ideas from her sound art and applied the to the music, basing songs around repetitive phrasing, random exclamations, and sometimes what appeared to be just plain gibberish.  In a typical Life Without Buildings song, she’ll talk-sing non-stop, jabbering and stuttering weird phrases, squealing with childish glee, and in general sounding a little bit like a toddler.

On the second listen to their lone album Any Other City, I was suddenly obsessed.  By about the fifth, I wanted to be Sue Tompkins’ best friend.  It’s now one of my favorite albums ever and I don’t think I’ve been so obsessed with a band since I got into Sleater-Kinney.  But, while I have an easy time explaining why Sleater-Kinney is so great, I find it a bit more difficult to articulate the brilliance of Life Without Buildings.

I think Life Without Buildings is one of the few bands that just has a magical aura about them, and it’s mostly due to Tompkins.  While indebted to previous talk-singers like The Fall’s Mark E. Smith and various female post-punkers, she has a vocal style that is unlike anything else in music due to her lyrics.  While it would be easy to write off those lyrics as the improvised workings of a crackpot, I’m convinced that there’s a deeper meaning to them.  I’m just not sure what yet, and that’s part of the band’s allure:  Every song is like a riddle that is impossible to fully crack.

Perhaps the genius of the band fully set in when I listened to their live album Live at the Annandale Hotel.  While I’m typically not a fan of live albums, this one is an essential recording of a rare performance from a short-lived band, and features Tompkins’ adorable stage banter and breathless enthusiasm.  Most shockingly of all, the live versions of the songs are near carbon copies of the ones on record, proving that there’s a real method behind Tompkins’ madness.

Lost in all this blathering about Tompkins is that the band behind her was extremely good as well.  Led by Robert Johnston’s melodic guitar playing, they’re the perfect complement to Tompkins’ ramshackle vocals.  Rather than be flashy and show everyone how great they are at playing their instruments, they’re willing to take a backseat and complement Tompkins with strong rhythmic playing.

As mentioned, LWB only made one album, Any Other City.  Along with a couple songs off singles, they have 14 songs in total (along with the accompanying live versions from Live at the Annandale Hotel).  I’ve been playing the crap out of all of them, treasuring every second that the band recorded and constantly wishing there was more.  Unfortunately, the band broke up, partly because Tompkins wanted to go back to pursuing her art.

While their scant amount of material is disappointing, it’s acceptable when the quality of everything is so high.  The band mostly had one trick anyways, so it’s hard to know what they would have done after Any Other City.  On that album, they use pretty much every variation of that trick perfectly, delivering a set of songs that are more different from each other than they appear on first listen.  The first track is “PS Exclusive”, the fastest paced and most rocking song on the album which immediately asserts the genius of Tompkins, who cycles through phrases like “the right stuff” and “this is not advice” until they’re burrowed into your brain.

More than any other band, there are specific little moments in each LWB song that I absolutely love, and it’s easy to collect a list of favorite phrases from the eminently quotable Tompkins.  “Let’s Get Out” has some of her best lines, including “LOOK AROUUNDDDDD”, “look back and say that I didn’t!” and “come complete!”  The spiky instrumentation makes it possibly the most post-punk track on the album, but Tompkins’ vocals always separate LWB from the post-punk revival bands that would follow them (usually gloomy Joy Divison knockoffs).

While I love all of their songs, “The Leanover” stands out among them and is, in my opinion, one of the best songs of the last decade.  It’s wordy even for LWB standards, and I love reading different interpretations of the song (one rumor is that it’s about fellatio; I prefer to think of it as being about the beginnings of a relationship in general).  It’s littered with pop culture references (M-B-V would seem to be a nod to My Bloody Valentine, Virginia Plain, etc) and more Tompkins-isms like “I don’t trade”, “contact!”, and “he’s the shaker, baby!”  The rest of the band gives it a perfect background with a more laid back, dreamy sound.

There’s numerous other highlights on the album:  The mostly spoken-word finale “Sorrow”, the jaggedy pop of “14 Days”, “Juno” with its tempo changes and ringing guitars.  I think every song is worth checking out, although the band is obviously an acquired taste:  What makes Tompkins such a genius is also what likely drives a lot of people away from the band.  Regardless, in a decade that I thought was marked by a lot of boring and unoriginal music, Life Without Buildings stood out as a unique band that had more charisma and personality than any of their peers.